Bill & Roberta Ramirez: Home Is Where the Pets Are 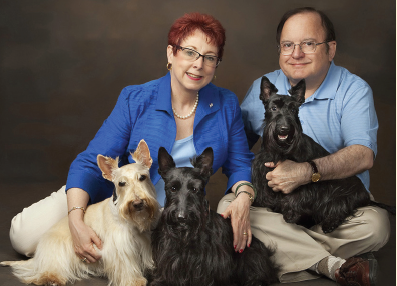 For Bill and Roberta Ramirez, “home” is not a static place—home is where their pets are. Bill and Roberta spent two decades living all over the globe—Houston, Brussels, Geneva, New York, Hong Kong—but there were two things that kept them grounded: their love for each other (“it was like being on permanent honeymoon,” Roberta says), and their three Scottie dogs, who always travelled with them. In 2008, Bill’s job took them to Oregon, where they bought a house in West Linn and decided to put down roots. “We’ve moved all around the world, and we like it here. We’re tired of packing and unpacking,” Roberta says, smiling. “Plus, we have a backyard: the dogs have just blossomed here.”

When Bill quit his job in 2009, they both knew they would go crazy if they didn’t stay active. Roberta joined a quilting group that makes blankets for primates at the Oregon Zoo; Bill started teaching part-time at Portland State University; and they both applied to volunteer at OHS. As dog lovers, working with OHS was a no-brainer, Bill says. “It was an easy choice. They have a tremendous reputation, and an adoption success rate of 98%.”

Roberta and Bill joined the OHS dog-walking squad, arriving like clockwork every Monday evening to help socialize and exercise eager canines. “It’s good therapy for the dogs: it calms them down and makes them more adoptable,” Roberta says. It’s fun for Bill and Roberta, too: “We get our exercise ... and we often treat ourselves to dinner at Salty’s afterwards as an added perk,” Bill admits.

The dog walking proved so enjoyable that Bill and Roberta joined a number of other OHS initiatives, such as volunteering at adoption outreach activities, helping out at the annual Santa Paws photo event (where Bill plays the role of Santa) and donating to the OHS Holman Medical Center. They have also become part of the Kennel Buddies program, helping to socialize and comfort dogs who need a little extra TLC. “Some dogs are as cute as buttons, and some of them are a little nervous, but I’ll spend time with them, and they relax,” Roberta says. “It’s therapeutic for them, and for me, too.”

The OHS Friends Forever™ program has also become dear to Bill and Roberta. “It’s as though you had children: if something happened to you, you’d want them to be provided for. Our dogs couldn’t survive on their own—they’re completely spoiled!” Bill says. Roberta and Bill already donate regularly to OHS, but they have also added into their will a bequest to the organization to cover the care of their pets. “We set aside a sum for each of our animals. It’ll be more than they need, but this will provide funds to help other pets too,” Bill says.

Friends Forever is just one reason that Bill and Roberta contribute to OHS. An experienced businessman, Bill says, “It’s good leadership: it has vision and direction, and we know that our time and our money are well-spent.” Their fellow volunteers are another motivating factor. “It’s amazing how devoted the people are here—I’ve met folks that love the place so much that they even want to do the laundry,” Roberta says. “They throw a good volunteer party, too!” Bill adds.

But as wonderful as the volunteer camaraderie is, ultimately Bill and Roberta contribute their time and money to OHS for one simple reason. “We do it for the animals,” Bill says. Roberta agrees: “My main reward is in the kennels—the lick on the cheek that I get sometimes. When you see a nervous little dog who’s relaxed when you leave, it’s so rewarding,” she says.